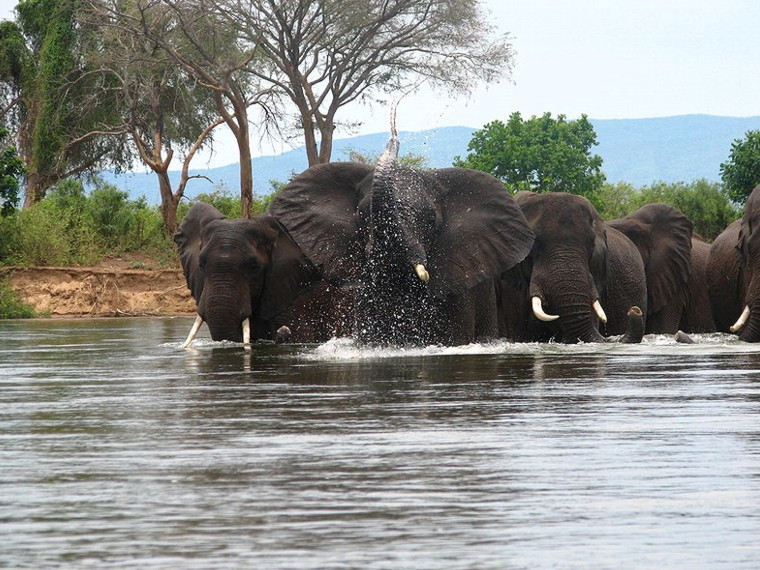 The Lower Zambezi National Park lies on the north bank of the Zambezi River in southeastern Zambia. Until 1983 when the area was declared a national park, the area was the private game reserve of Zambia's president. This has resulted in the park being protected from the ravages of mass tourism and remains one of the few pristine wilderness areas left in Africa. On the opposite bank is Zimbabwe's Mana Pools National Park. The two parks sit on the Zambezi flood plain ringed by mountains. The area is a world heritage site. In fashion with the current trend in Southern Africa, there is talk of linking the two parks to form a massive trans-frontier park.

The park gently slopes from the Zambezi Escarpment down to the river, straddling two main woodland savannah ecoregions distinguished by the dominant types of tree, Miombo and Mopane: Southern Miombo woodlands on higher ground in the north, and Zambezian and Mopane woodlands on lower slopes in the south. At the edge of the river is floodplain habitat.

The park itself is ringed by a much larger game management area (commonly referred to as GMA); there are no fences between the park and the GMA and both animals and people are free to roam across the whole area. The attraction of the Lower Zambezi park and its surrounding GMA is its remote location. Unlike South African parks, there are no paved roads and you are very unlikely to encounter another tourist whilst traveling around. Tourist numbers are minimized due to the park being inaccessible by road, unless one has advanced 4x4 driving skills and even then only at certain times of the year. Tourists visit the park either on a boat on the Zambezi or by light aircraft flying from either Livingstone or Lusaka.

Most large mammals in the national park congregate on the floodplain, including the Cape buffalo, a large elephant population, lion, leopard, many antelope species, crocodile and hippopotamus. Occasional sightings of the Cape wild dog occur throughout this park which is one of Zambia's best strongholds for them. There are also a large number of species of birds, but no black rhinoceros population remained around the time the national park was declared, in 1983.