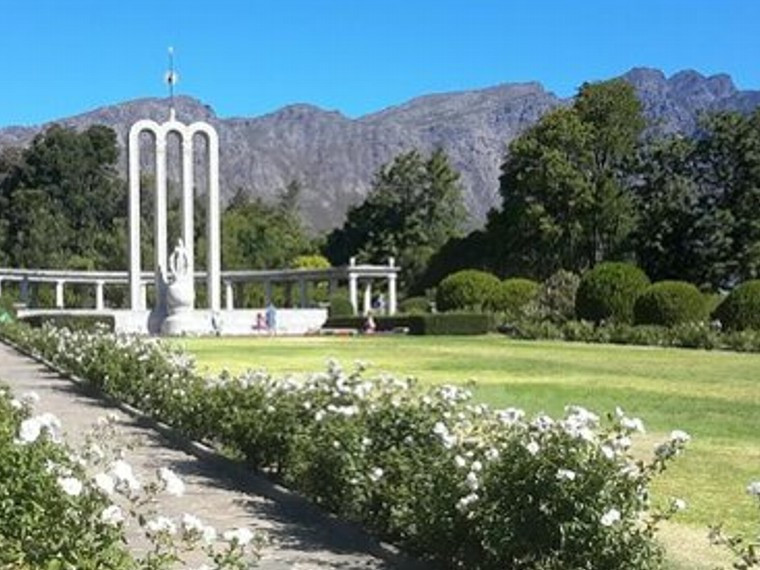 The Huguenot Memorial Monument in Franschhoek – South Africa’s French Corner –, where almost everything has a French name and origin, was inaugurated in 1948 to honour the influence of the French in South Africa. The French Huguenots immigrated to South Africa to escape religious persecution in Europe and mainly arrived at the Cape between 1687 and 1689. This elegant and religiously-inspired monument displays a historic French character and is definitely worth a visit. The religious freedom is symbolised by a female character, standing on top of a globe, holding in her one hand a bible and in the other hand a broken chain.

Enjoy a great picnic in the beautiful wildflower garden around the monument or take a walk down the main street to visit one of the great restaurants. Some local wine farms are not far away to complete your French experience in South Africa.

The Huguenot Memorial Museum was designed as a beautiful Cape-Dutch-style building and is located next to the Huguenot Memorial Monument. The museum was officially opened on March 11th 1967 and shows the well documented history of the French Huguenots before and after their arrival at the Cape of Good Hope thus keeping the influence and meaning of the Huguenot settlement in South Africa alive.

The exhibition includes a large variety of furniture, bibles, silver ware, tools to make wine, documents, relics and artefacts. Take a look into the challenges they faced getting to South Africa, their culture and desire for a better life, the effect they had on modern South African culture and how they lived.