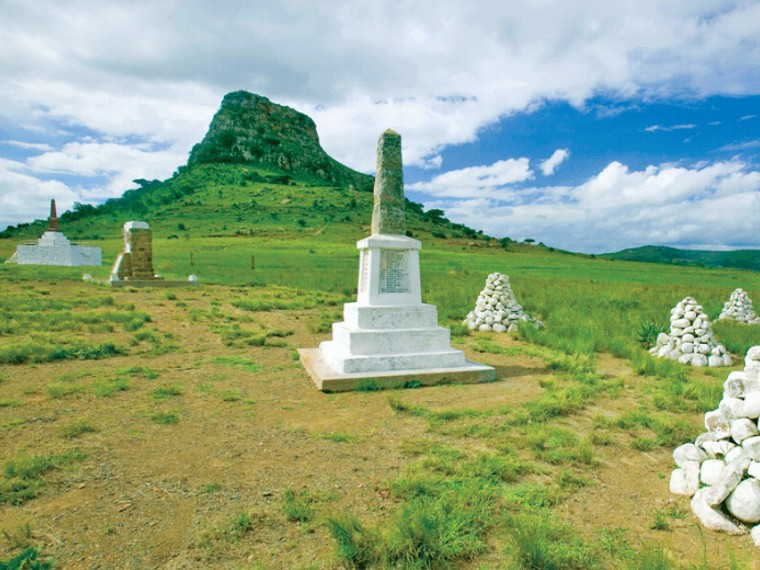 The battles fought in the rolling hills and valleys of northern KwaZulu-Natal some 120 years ago changed the course of South African history, and still today, the area now known as the ”Battlefields” seems to echo with the heroic and often tragic deeds of the past. The sites of famous skirmishes that rocked the British, weakened the Boers and broke the mighty Zulu nation continue to draw visitors.

A good place to start and to give some context to your visit to this fascinating and beautiful region of KZN would be to take a guided tour. Other options are to self-drive to each site with a good guidebook and just enjoy the beautiful and often haunting views, or for a wonderfully authentic experience, you can tour some places on horseback. Engaging the services of a qualified tourist guide will bring these sites to life. A great many forts established by the British during the South African wars have disappeared, while others, such as Fort Durnford near Estcourt, are now most interesting and somewhat quirky museums.

Isandlwana and Rorke’s Drift are two of the most famous battlefields in the country, and also perhaps in British history, perhaps because it was here that, in a furious two-hour battle, Zulu forces armed primarily with traditional spears and shields thrashed the mighty British Colonial Empire forces, one of the few times they were ever routed by an indigenous army. Eleven Victoria Crosses were awarded to those who defended Rorke’s Drift.

Another interesting battlefield site is Spioenkop, where three men who would play an important role in world affairs were present. Winston Churchill was there as a war correspondent, Mahatma Gandhi was present as a stretcher bearer, and Louis Botha became the first prime minister of the Union of South Africa. Visits to Elandslaagte, the Blood River Monument and Talana Museum near Dundee are also worthwhile.

On an annual basis, numerous re-enactments of some of the famous battles take place. These are great fun-filled affairs with many local people dressing up in bright red, colonial British soldier or traditional Zulu warrior attire. Food, music and other activities often accompany these events.